To protect our customers and employees, we are closing our main reception until further notice. Our customers are welcome to contact us through the hotline or download myBupa for eclaims and more services. Bupa has also launched a series of extended coverage for coronavirus disease. View more details here. If you're a Bupa Global customer, please visit bupaglobal.com .

The symptoms of asthma are caused when airways (the tubes which carry air to and from your lungs) narrow and become inflamed.
This may happen if there's too much mucus being produced in your airways, or swelling or spasm in the lining of your airways. You feel breathless, wheezy, and may develop a dry cough. The symptoms can be severe and distressing, and you might even need to be admitted to hospital.

The symptoms of asthma can be set off by a variety of different triggers. These include:
With many people with asthma, especially children, an allergy to house dust mites and animal hair or fur is common. If you have allergic asthma, you or other family members may well also suffer from eczema or hay fever.
Other possible allergens include:
All these triggers can irritate the airways in your lungs, making you more prone to an attack. But why your symptoms come on at particular times, and why some people are affected and not others, is not yet known. 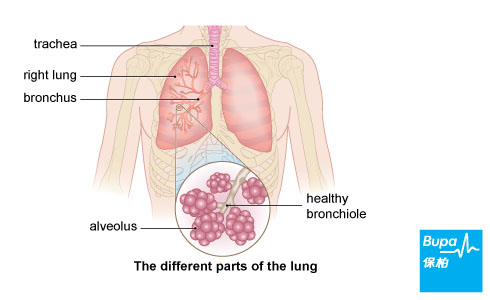 Your doctor will probably use a device called a peak flow meter to help work out whether you have asthma, and to monitor progress of your treatment. With a peak flow meter, you blow into a tube as hard as you can and as quickly as possible.

This gives your doctor a measure of how severe your breathing is affected. If measured regularly, over time, these readings can also help reveal how well or badly your asthma is being controlled.

Your doctor may also suggest some tests to see how your lungs are working to help with a diagnosis.

It's worth remembering, though, that asthma is not always easy to diagnose. After all, anything that causes congestion of your lungs or airways can lead to problems that look like the symptoms of asthma.

For example, a child may show all the classic symptoms of asthma, but in fact he or she may have inhaled something which is blocking his or her airways (a coin or a button, for example).

In some cases, the symptoms of asthma in an adult may be a sign of heart disease, especially if you get wheezy when you have not ever had an asthma attack in the past. Some forms of heart disease can cause congestion of the lungs, and have symptoms like asthma.

Although it's not easy to eliminate them altogether, it's important to try to avoid anything you suspect might make your asthma worse, or bring on an attack. But there's also a range of treatments which may help keep your symptoms in check. And your peak flow should be measured regularly. Your doctor may do this for you, but you may also be able to do it yourself.
Inhalers
There is a choice of devices to help control asthma - you may find you like one type more than another. The most commonly used one is an inhaler - or puffer - to breathe in a drug which should help with your asthma. But whatever device you use, it is important that your doctor or nurse checks that you are using it effectively.
There are two main types of medication that can be delivered via your inhaler - a reliever and a preventer.
A reliever helps to open up your airways quite quickly - so this type is for when you are having an asthma attack and already feeling the onset of symptoms. Common reliever drugs include salbutamol (Ventolin), terbutaline and ipratropium.
Preventer drugs, which can be used together with relievers, are for suppressing the symptoms on a day-to-day basis. Most preventers are inhaled steroids that act to reduce the inflammation in your airways. You will probably be prescribed a preventer only if you regularly have to use a reliever twice a day or more.
Unlike relievers, preventers aren't meant to have an immediate effect and must be used as prescribed, whether or not you have any symptoms.
Common preventer drugs include beclomethasone, budesonide and fluticasone. In the inhaled form, steroids have much fewer side-effects than steroids in tablet form.
Tablets
If your asthma is quite severe or unpredictable, you may be put on a course of steroids in tablet form. These work in the same way as inhaled preventers, by reducing inflammation.
Your doctor may also give you tablets called leukotriene antagonists - a relatively new treatment that is mostly used together with relievers and preventers. Other useful medicines include theophyllines (tablets) and sodium cromoglygate (inhaler).
Nebulisers
If your asthma is severe, you may be put on a nebuliser. This is a machine that makes a mist of water and medication that you breathe in. The medication is usually relievers, but may sometimes be preventers.
The main advantage of a nebuliser is that it can deliver more of the drug exactly where it's needed than a conventional inhaler. This is particularly critical if you have a very serious attack of asthma and need reliever delivered quickly into your lungs.
They are also sometimes used to treat young children, who may have problems using an inhaler or taking tablets.
Spacers
Spacers offer an alternative for people who find an inhaler awkward to use. They’re also good for getting more of the drug into the lungs.
A spacer is a long tube which clips on to the inhaler. At the other end the tube is a mouthpiece or mask which you breathe into.

If you suffer from asthma - or you have a child who does - it's worth remembering that it is something you can control yourself to a large degree.

Talk to your doctor and find other information to help you understand what might be causing the asthma, and how to avoid coming into contact with those particular triggers.

Plan ahead - always be prepared, so you are ready to help yourself when you do feel the symptoms coming on. This should help you cut down your risk of more serious attacks, and of needing to go to hospital.

This information was published by Bupa Group's Health Content Team and has been reviewed by appropriate medical or clinical professionals. To the best of their knowledge the information is current and based on reputable sources of medical evidence, however Bupa (Asia) Limited makes no representation or warranty as to the completeness or accuracy of the Content.

The information on this page, and any information on third party websites referred to on this page, is provided as a guide only. It should not be relied upon as a substitute for professional medical advice, nor is it intended to be used for medical diagnosis or treatment. Bupa (Asia) Limited is not liable for any loss or damage you suffer arising out of the use of, or reliance on, the information.

Third party websites are not owned or controlled by Bupa and any individual may be able to access and post messages on them. Bupa is not responsible for the content or availability of these third party websites. Last updated August 2017.