Bupa Hong Kong, the leading health insurance specialist, is launching the "One Health" campaign to raise awareness of the connection between our health and the planet’s health. As part of the campaign, we release today commissioned research by the Centre for Communication and Public Opinion Survey of the Chinese University of Hong Kong investigating views in Hong Kong surrounding health and the environment.

"One Health", a concept that has long been advocated by academics and sustainability experts around the world, identifies that the health of people is interconnected and interdependent with the health of the planet1. This close relationship between human and nature makes preserving the environment not only an environmental matter, but also integral to human health.

The research was conducted in May 2021, surveying 303 people in Hong Kong aged 18 – 65 2 on their perspectives on environment and health. While awareness of the phrase “One Health” is relatively low, an overwhelming majority of respondents have taken steps to adopt a more sustainable lifestyle.

The unprecedented pandemic has prompted real action, even though over 1 out of 4 respondents admit to experiencing "green fatigue". While many believe their individual actions contribute to change, most respondents say the government and business sectors should commit more strongly to sustainability.

"One Health" not widely known, but generally understand and agree with the concept

Although a majority of respondents (97.2%) are not aware of the phrase “One Health”, they generally (85.8%) agree that there is a close link between human health and the ecological environment.

Almost all respondents (96.6%) say that they are either concerned or moderately concerned about global environmental issues, with climate change (34.6%) and air pollution (30.1%) being top of mind.

The COVID-19 pandemic has resulted in a higher awareness of environmental issues, as stated by three in five respondents (59%). Nearly half (49.7%) suggest that it has prompted them to take real action to adopt a more sustainable lifestyle.

Most respondents (96.3%) make efforts to live more sustainably, with "reducing use of single-use plastic straw/cutlery" (71.7%), "bringing your own bags, boxes/bottles" (71.1%) and "recycling bottles/cans/papers" (58.3%) being the top three actions taken.

Meanwhile, at least half of the respondents (54.2%) believe that their individual actions could never be too little too small, a percentage that increases significantly among younger respondents aged 18–34 (69.2%) and those with tertiary education (71.2%). Nonetheless, a quarter of respondents (26.4%) mention that they have experienced "green fatigue".

Room for improvement and high expectations for institutional initiatives

When asked about the factors preventing people from practicing sustainability, over half (57.4%) say the “lack of facilitative measures” is a key challenge. Additionally, most (88.5%) say that they have not heard of the Climate Action Plan 2030+ initiated by the city’s government, indicating that governmental bodies may have a greater role to play in promoting environment action.

Specifically for business sectors, close to 50% of current employees believe their companies are not actively engaged in environmental protection, such as waste reduction or setting targets for reducing carbon emissions. An overwhelming majority agree that the government (87.1%) and business sectors (90%) should make a stronger commitment to sustainability.

Bupa Hong Kong has always put sustainability at the core of our business strategy, not only through protecting against the unexpected, like the pandemic, but looking after all aspects that ultimately affect health, including the environment. As a trusted healthcare partner, reducing the impact of our business contributes to Bupa's broader goal of improving the health of people and the planet. Through the commissioned survey and other initiatives, Bupa aims to bring "One Health" into the spotlight, empowering people with knowledge and opportunities to take action, so that they can incorporate sustainability into their daily lives.

Understanding the expectations that the public holds for businesses, Bupa is ready to shoulder more responsibility in environmental protection by committing to and announcing two new pledges and three real actions.

"To be healthy people, we need to have a healthy planet," said Penny Davis, Director of Brand, Customer and Corporate Affairs at Bupa in Hong Kong. "Our One Health survey revealed that some people have made proactive steps to live more sustainably, but others are looking for more information and support. They expect meaningful action from government and businesses. As one of the world's largest healthcare companies, Bupa has a role to play and a responsibility to act. We want more people to understand that their own health is closely connected with environmental sustainability. From July, we will be launching a series of One Health initiatives. We want to empower Hongkongers with the knowledge and incentives to live more sustainably, which in turn, will help them to live longer, healthier, happier lives."

Penny added: “People are also calling on the government and business sectors to do more to drive environmental sustainability. Government policies that provide more incentives for the public and measures that encourage green culture amongst corporates can make a big difference in driving changes and progress. For Bupa, we are pleased to announce two pledges and three actions, setting carbon reduction targets and reducing the impact of our own operations. It is our commitment to keeping people well and supporting a healthier planet for our employees, partners, customers and communities.”

For more information about Bupa’s One Health campaign and the survey, please visit: http://www.bupa.com.hk/OneHealth 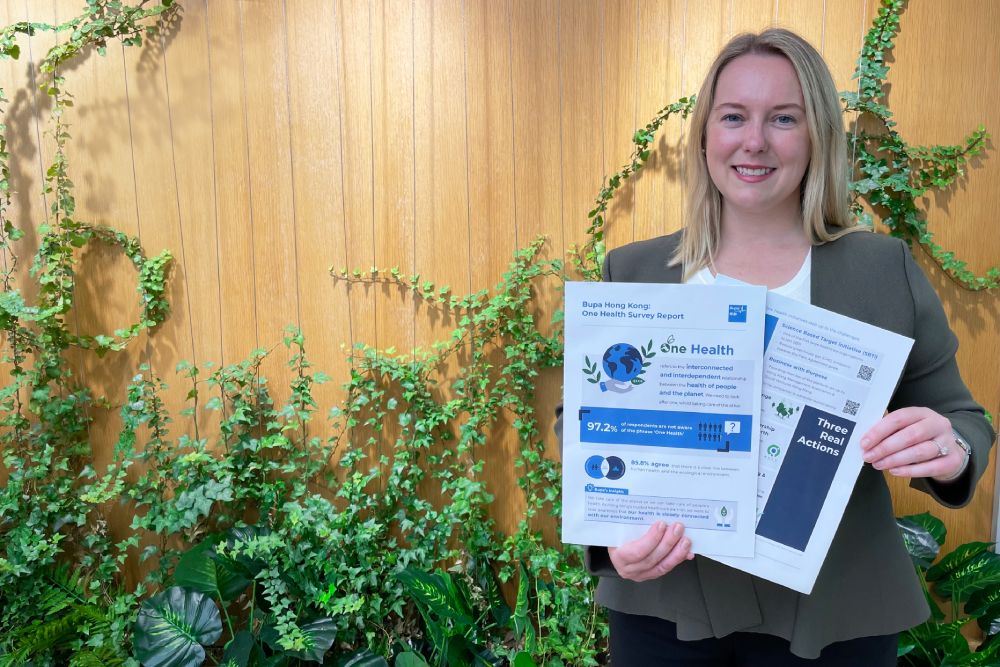 Penny Davis, Director of Brand, Customer and Corporate Affairs at Bupa in Hong Kong advocates for "One Health" to raise awareness of the connection between our health and the planet's health

Logo of the Bupa Hong Kong One Health campaign

We are an international healthcare company serving over 31 million customers worldwide. With no shareholders, our customers are our focus. We reinvest profits into providing more and better healthcare for the benefit of current and future customers.