Our reception is open and we welcome you to visit us during office hours. Visitors may be required to complete a health declaration. You are welcome to contact us through the hotline or download myBupa for eclaims and more services. Bupa has also launched a series of extended coverage for coronavirus disease. View more details here. If you're a Bupa Global customer, please visit bupaglobal.com .

Bowel cancer, also known as colorectal cancer, is the name for any cancer of your large bowel and rectum (back passage). Very rarely, cancers can occur in your small bowel.
Your large bowel (also called your colon) is the last section of your digestive system. Food passes through your small bowel (the longer, thinner part of your bowel) where nutrients are absorbed. Food waste then travels through your large bowel, where it becomes more solid faeces.
Your large bowel has three sections: the ascending; transverse; and descending colon. Your rectum, at the end of your large bowel, is where faeces collects before passing through your anus as a bowel movement.
Usually, large bowel cancers develop from small, non-cancerous (benign) growths of tissue called polyps that can extend from the lining of your bowel wall. Sometimes polyps can become cancerous (malignant) over time. If the cancer isn't treated, it can grow through the wall of your bowel and spread to other parts of your body. 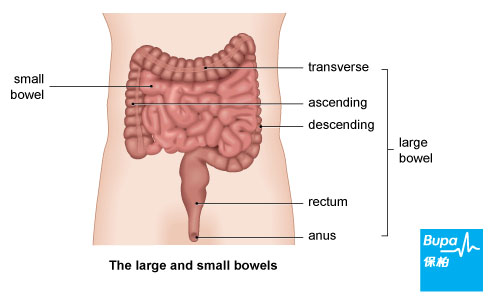 Bowel cancer is often painless in the early stages, but there are symptoms, including:

These symptoms aren't always due to bowel cancer. However the symptoms shouldn't be ignored so if you have them, see your doctor. If bowel cancer is caught early there is a better chance of curing it.

Your doctor will ask about your symptoms and examine you. He or she may also ask you about your medical history. Your doctor may refer you to a doctor or surgeon who specialises in colorectal disease.
Tests for bowel cancer include the following.
If your doctor diagnoses bowel cancer, you may need further tests to find the size and position of the cancer.
These tests may include:
Screening for bowel cancer

Screening is important for detecting bowel cancer in its early stages.
You may choose to have regular screening if you:

The type of treatment you have will depend on the size of the tumour, its position and whether it has spread.
Surgery
Surgery is the most common treatment for bowel cancer.
If you have surgery, the part of your large bowel that contains the cancer will be removed and the two open ends joined together. Lymph nodes (glands found throughout your body that are part of your immune system) near your bowel are often removed because they are the first place the cancer usually spreads to.
Sometimes, depending on the location and size of the cancer that is removed, the two ends of your bowel can't be rejoined. If this happens, the opening nearest the beginning of your bowel will be brought out on to the skin surface of your abdomen. A colostomy is an opening of your large bowel onto the surface of your tummy (abdomen) and an ileostomy is an opening of your small bowel onto the surface of the abdomen. The opening of the bowel is known as a stoma.
A bag is worn over the stoma, which collects your bowel movements outside your body. Most people who have surgery don't need a colostomy, but if you do, it's usually temporary.
If you have cancer in your rectum, you may need surgery to remove the part of your rectum that contains the cancer, as well as the fatty tissue and lymph nodes around your rectum. You're more likely to need a colostomy if you have cancer of the rectum than if you have cancer of the colon.
Non-surgical treatments
Chemotherapy and radiotherapy

Sometimes it's not possible to remove all the cancer by surgery, so you may need to have additional treatment with chemotherapy and/or radiotherapy.
These treatments are given to destroy any remaining cancer cells and to prevent it spreading further. Chemotherapy and radiotherapy are also sometimes used to shrink the tumour before surgery or to kill any cancer cells that are left after surgery.
Chemotherapy and radiotherapy can both have side-effects.
Monoclonal antibodies
Monoclonal antibodies (MABs) are medicines that are designed to recognise and target markers that are commonly carried by cancer cells. There are three main MAB treatments for bowel cancer:
These medicines seek out cancer cells and stop them growing. They are sometimes used alongside chemotherapy. They can be used for various stages of cancer - ask your doctor for more advice.

There is evidence that taking the following steps can help to reduce your risk of getting bowel cancer.

This information was published by Bupa Group's Health Content Team and has been reviewed by appropriate medical or clinical professionals. To the best of their knowledge the information is current and based on reputable sources of medical evidence, however Bupa (Asia) Limited makes no representation or warranty as to the completeness or accuracy of the Content.

The information on this page, and any information on third party websites referred to on this page, is provided as a guide only. It should not be relied upon as a substitute for professional medical advice, nor is it intended to be used for medical diagnosis or treatment. Bupa (Asia) Limited is not liable for any loss or damage you suffer arising out of the use of, or reliance on, the information.

Third party websites are not owned or controlled by Bupa and any individual may be able to access and post messages on them. Bupa is not responsible for the content or availability of these third party websites. Last updated August 2017.